Whether you’re just looking for something to read over the weekend or just plainly a bookworm, chances are you have been searching and craving for a new novel satisfy your eyes. Well, wait no more. Because today we bring you some of the best creations of the Pulitzer Prize winning author, Cormac McCarthy.

A little background on the novelist, McCarthy has authored ten novels, many of which have had numerous awards. His book The Road, was awarded four times, namely, 2006 James Tait Black Memorial Prize for Fiction, 2007 Pulitzer Prize for Fiction, 2008 Premio Ignotus, and 2008 IMPAC Award. Still, his novel No Country For Old Men, not only won recognition but was also adapted into film which was successful in garnering four Academy Awards.

There’s no doubt this 81-year old genius writer would pen every novel a masterpiece.

Here are some of them.

1. Blood Meridian: Or the Evening Redness in the West 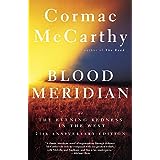 “An epic novel of the violence and depravity that attended America’s westward expansion, Blood Meridian brilliantly subverts the conventions of the Western novel and the mythology of the “wild west.” Based on historical events that took place on the Texas-Mexico border in the 1850s, it traces the fortunes of the Kid, a fourteen-year-old Tennesseean who stumbles into the nightmarish world where Indians are being murdered and the market for their scalps is thriving.”–Book Cover 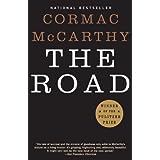 “A father and his son walk alone through burned America. Nothing moves in the ravaged landscape save the ash on the wind. It is cold enough to crack stones, and when the snow falls it is gray. The sky is dark. Their destination is the coast, although they don’t know what, if anything, awaits them there. They have nothing; just a pistol to defend themselves against the lawless bands that stalk the road, the clothes they are wearing, a cart of scavenged food—and each other.

The Road is the profoundly moving story of a journey. It boldly imagines a future in which no hope remains, but in which the father and his son, “each the other’s world entire,” are sustained by love. Awesome in the totality of its vision, it is an unflinching meditation on the worst and the best that we are capable of: ultimate destructiveness, desperate tenacity, and the tenderness that keeps two people alive in the face of total devastation.” –Book Cover

3. All the Pretty Horses (The Border Trilogy, Book 1) 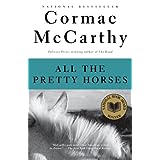 “The national bestseller and the first volume in Cormac McCarthy’s Border Trilogy, All the Pretty Horses is the tale of John Grady Cole, who at sixteen finds himself at the end of a long line of Texas ranchers, cut off from the only life he has ever imagined for himself.  With two companions, he sets off for Mexico on a sometimes idyllic, sometimes comic journey to a place where dreams are paid for in blood.  Winner of the National Book Award for Fiction.”– Book Cover 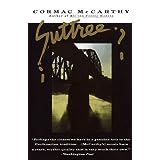 “Suttree is the story of Cornelius Suttree, who has forsaken a life of privilege with his prominent family to live in a dilapidated houseboat on the Tennessee River near Knoxville.  Remaining on the margins of the outcast community there–a brilliantly imagined collection of eccentrics, criminals, and squatters–he rises above the physical and human squalor with detachment, humor, and dignity.”– Book Cover 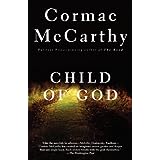 “In this taut, chilling novel, Lester Ballard–a violent, dispossessed man falsely accused of rape–haunts the hill country of East Tennessee when he is released from jail. While telling his story, Cormac McCarthy depicts the most sordid aspects of life with dignity, humor, and characteristic lyrical brilliance.”–Book Cover 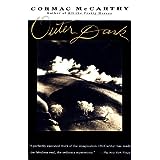 “Outer Dark is a novel at once fabular and starkly evocative, set is an unspecified place in Appalachia, sometime around the turn of the century.  A woman bears her brother’s child, a boy; he leaves the baby in the woods and tells her he died of natural causes.  Discovering her brother’s lie, she sets forth alone to find her son.  Both brother and sister wander separately through a countryside being scourged by three terrifying and elusive strangers, headlong toward an eerie, apocalyptic resolution.” –Book Cover