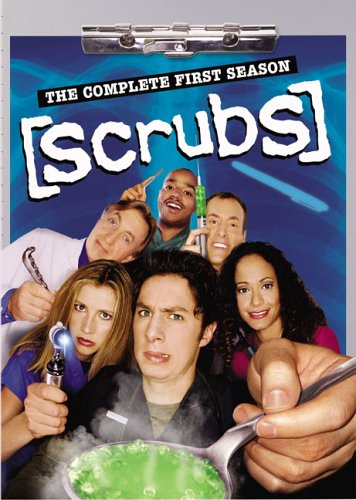 Check into the surreal world of Sacred Heart Hospital, where the staff is bizarre and the laughter is contagious. Fresh-faced J.D. (Zach Braff) and his fellow new medical residents weave their way through each unpredictable day with hilarious results. SCRUBS is “a masterpiece,” raves Matthew Gilbert of The Boston Globe. Now relive all 24 episodes of the groundbreaking show’s highly acclaimed first season. With a host of great bonus features, including deleted scenes and a fascinating retrospective documentary, this spectacular three-DVD set is off-the-charts entertainment you’ll want to watch over and over again. 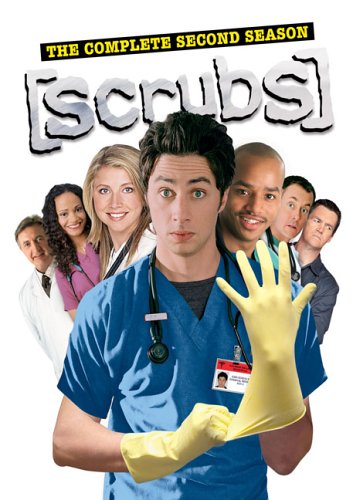 Make an appointment with SCRUBS. Nominated for two Emmy(R) Awards in its second year, the hilarious sitcom is “irreverent and widely inventive,” raves TV Guide. Will J.D. get together with Elliot, and will Carla finally accept Turk’s wedding proposal? The wacky staff of Sacred Heart Hospital is back and they’ve brought along some guest stars (Heather Locklear, Tom Cavanagh, and John Ritter) for a booster shot of laughs. Enjoy all 22 episodes of the SCRUBS sensational second season — with the original, unedited music. Overflowing with great bonus features, including a one-on-one with John C. McGinley, and outtakes and deleted scenes, this spectacular DVD box set offers the best kind of contagious comedy. 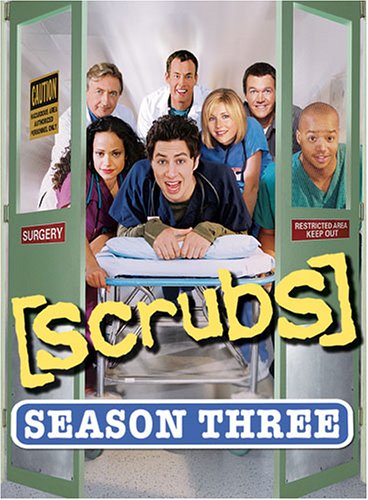 Get ready for one wacky house call with the hilarious third season of SCRUBS. It’s a whole new year for the staff of Sacred Heart as Elliot undergoes a complete makeover in an attempt to change her luck, and the residents discover the incredible healing powers of an epiphany toilet. 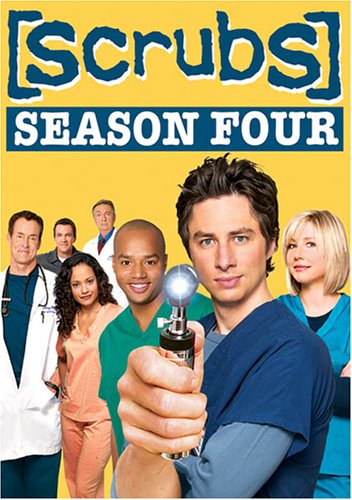 This year, the laughs are off the charts in TV’s most surreal and sidesplitting show. SCRUBS’ hilarious fourth season does “an amazing job combining cheeky comedy…and honestly poignant drama,” raves Newsday. Catch the most contagious comedy around with every episode, complete with hysterical bonus features and the show’s original, unedited music in 5.1 Surround Sound. Matthew Perry, Tom Cavanagh and Molly Shannon are just a few of the guest stars joining the staff this year. And the crew of Sacred Heart makes their biggest moves yet as Elliot leaves the hospital for a new job, and J.D. faces life on his own for the first time. 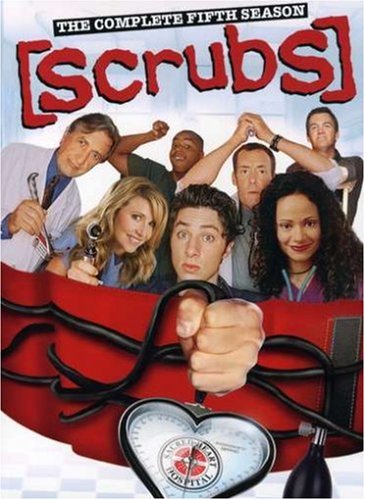 Make an appointment with the outrageous doctors of Sacred Heart. Garnering an Emmy(R) Award nomination for Best Comedy Series, SCRUBS’ fifth season is “sillier and more whimsical than ever,” raves NEWSDAY. This year, the laughs are off the charts as J.D. moves in with Turk and Carla, and Elliot uses an interesting form of blackmail in order to get her job back at the hospital. Jason Bateman and Cheryl Hines are just some of the sensational guest stars joining TV’s quirkiest cast. Experience all 24 episodes, plus exclusive bonus features, including a never-before-seen extended cut of the 100th episode. It’s just what the doctor ordered. 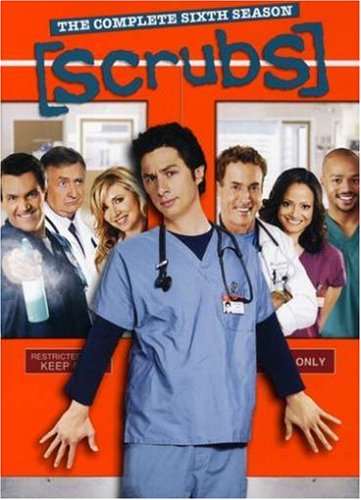 Fill your prescription for laughs with the sixth dose of the Emmy(R) Award-winning SCRUBS. The doctors of Sacred Heart make their rounds in the most surreal comedy on network television. Expect big bundles of laughs this year as J.D. and Kim, Turk and Carla, and Dr. Cox and Jordan are all expecting little bundles of joy, and the entire crew takes an unforgettable road trip. Continue your SCRUBS collection with all 22 episodes of the groundbreaking sitcom’s sensational sixth season. With a band of hilarious guest stars and exclusive bonus features, including alternate takes and bloopers, this 3-disc box set is the perfect cure for the entertainment blues. 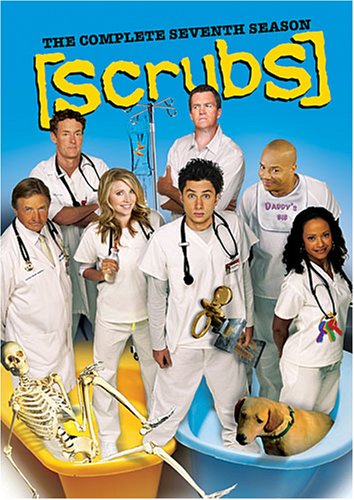 Get ready for an extra dose of laughs, and enjoy every surreal moment as television’s celebrated sitcom hits new heights in its sensational seventh season. Elliot, Turk and Carla may be growing older but they aren’t necessarily growing up, even as career changes, family issues and love invade the quirky world of Sacred Heart. The best way to enjoy the contagious comedy of Season Seven is on DVD, complete with exclusive bonus features — including a behind-the-scenes look at the “fairytale” episode directed by Zach Braff, bloopers and alternate lines. It’s off-the-charts entertainment you’ll want to watch over and over again. 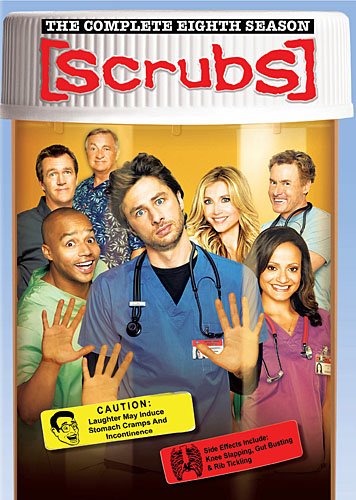 Enjoy every surreal moment of SCRUBS’ hilarious eighth season as television’s celebrated sitcome delivers “much more loopy, creative humor that fans have come to know and love,” raves Chicago Tribune. It’s a different world for attending physicians J.D., Turk and Elliot as they have their own interns to confuse and bewilder, and a major shakeup in the hospital staff might be enough to finally unite Dr. Kelso and Dr. Cox. Get a big shot of comedy as your favorite characters, and some exciting guest stars (including Courteney Cox), return for a hilarious new year at Sacred Heart. The best way to enjoy the contagious comedy of THE COMPLETE EIGHTH SEASON is on DVD, featuring exclusive bonus features — including deleted scenes, bloopers and webisodes. It’s just what the doctor ordered. 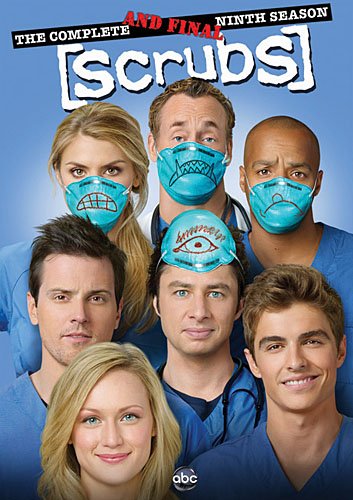 See how the story ends for J.D., Elliot, Turk and the rest of your favorite characters in ABC’s SCRUBS: THE COMPLETE NINTH AND FINAL SEASON. The heroes of Sacred Heart may have finished their rounds, but the laughs never stop as they mentor a brand-new class of med students! J.D. returns to teach at Sacred Heart’s medical school with the old gang and is surprised to find an impressionable young student has picked up where he left off. Meet Lucy and her classmates, Drew and Cole, as they try to fit in while they do their best to stand out. Relive every clever and quirky moment of SCRUBS’ outrageous final season, complete with never-before-seen bloopers, deleted scenes and interviews with the show’s cast. Complete your SCRUBS collection with The Ninth And Final Season on DVD. It’s the best house call you’ll ever get!