Just like wine, Madonna seems to be getting better with age. Every now and then, the media is always discussing her age. People are always trying to parallel her actions with her age. The lady is hot and the fact that she is always attracting younger men is a testament to this. If she were to head off to another world where nobody knew about her, she would blend easily with the 23 year olds. Let us check out some pictures in which she looks way younger than her real age. This was at the launch of Truth or Dare in New York City. If we did not know better, she would easily pass for a 26 year old. She always knows how to dress the part. Furthermore, it was her day, she had to be the show stopper. During this live performance at Hyde park in London, England 2012, she showed that she was not stopping any time soon. She is not ready to handover the mantle just yet or maybe she hasn’t seen anybody worth leaving the throne to. The leopard print bra was great on her.

It was the world cup and everybody was in the mood. With such a beauty supporting them, Italy had every reason to win. Her face looks flawless and physique is that of someone who eats healthy and works out from time to time. “Go Italy Go! na na na na na #just sayin,” she wrote. 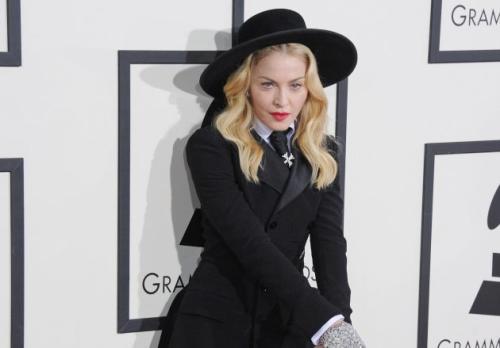 For the decades that she has been on the lime light, Madonna has always been a fashion icon. Save for her stunts on stage, she knows how to grace the red carpet. Always daring and giving the media something to feed on until when she shows up again. She pulled off this pantsuit look during the 56th Grammy Awards at Staples Center in Los Angeles.

During the MDNA tour at Madison Square Garden in 2012, she performed in a cheerleading uniform. She would definitely most cheerleaders a run for their money. She was moving on that stage like it was the ‘80s and she had just started her career.

That is a good shift from her blonde look and she manages to pull it off remarkably. She is a beauty, which should be more than enough to explain how she manages to look gorgeous in different looks.

You would be forgiven to think that this is 1989 and she is 25. You are not the first and will not be the last for as long as she is still around. Generations will come and go but she would still be as gorgeous as ever. This was at the Dolce & Gabanna and the Cinema society screening of Madonna: The MDNA Tour in NYC. She is the only one who can pull that curls and top hat look.

You will go out looking for a 56 year old who can still do headstands and you may end up with just one name: Madonna. Those bones are not aging any time soon. Brace yourselves for another decade of Madonna’s awesomeness.