Home  /  FUN  /  10 Most Daring Grammy Looks from Nominees and Guests

10 Most Daring Grammy Looks from Nominees and Guests

When it comes to making fashion statements, the Grammys, compared to any other music awards, has seen it all. It is after all the music equivalent of the Oscars. The awesome, the good, the daring, the bad and the ugly all have graced this event. This has gone to the extent where the CBS network issue warnings to attending artists and Guests to dress appropriately. Below are some of the most daring looks from nominees and guests at the Grammys over the years. It was the turn of a new century. Out with the old, and in with the new. The 90s were now behind us and Jennifer Lopez was just ushering in a new era. She chose the best platform, The Grammys. For as long as the Grammys shall continue to exist, this Versace dress shall always be part of its history. It was very daring of her to pull such as stunt.

It is a known fact that Toni Braxton has the best thighs the entertainment industry has to offer. However, in this case, we actually got more than our bargain. It is even quite hard to describe that look. All we can say is that, with the current CBS restrictions, that dress would not have passed the test.

May be somebody should just go all out nude already. It might have been for performance purposes only but that outfit is just daring. That is if it qualifies for an outfit. From here, it looks more like ropes. Whatever the case, it served its purpose. 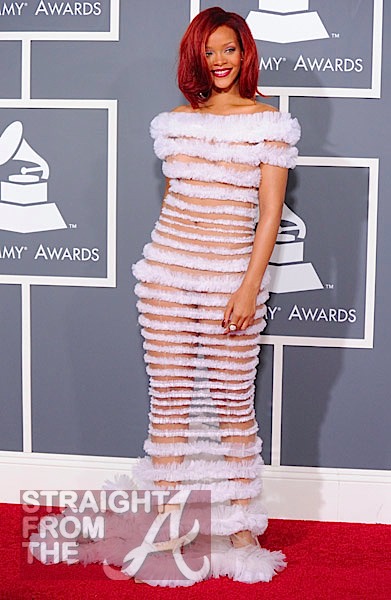 This was at the Grammys in 2011. This dress leaves little or nothing to imagination. It is all out there for those who have eyes to have an awesome field day. By now, the daring could as well just be labeled “normal”.

You could actually see the baby, couldn’t you? Now this qualifies for a daring outfit at a public event.

We had not even crossed over the century yet. For her she decided that the left breast only required a pasty. For that look, we would just leave it at that.

It is the Bra’s day out. The short dress did not making things any better for her. It might be less revealing than the others we have seen before but the outfit looks more of a “ready for bed” than a “ready for Grammys” outfit.

In 2004, the peacock did land at the Grammys. Magaret Cho decided to pull the peacock feather dress for her outfit during the event. From the look of things, she might have been having enjoying her outfit. For the rest of us, we are probably hoping the outfit never sees the light of day again.

She joins the list because it is unlike her. To have worn that red deep-v dress that has a high hemline was daring of her. Well, she is that girl.

She is Britney spears. There is no need to go any further. That should be enough to explain her outfit.